25% of all revenues generated from sales of this exclusive menu item will be donated to Hudson Pride Connections Center in Jersey City, NJ

Rainbow Hummus Can Be Ordered Here (Pre-Orders Are Available)

HOBOKEN, NJ – June 7, 2017 – Flatbread Grill®, a fast casual Mediterranean restaurant started by three sisters in Hoboken, NJ, has created an exclusive menu item to celebrate diversity and raise awareness for the underserved LGTBQ community. The Rainbow Hummus will be used to raise funds and support a newly formed partnership with the Hudson Pride Connections Center. The sisters’ chose to partner with Hudson Pride Connections Center for their locality and the center’s active support and education of an at-risk population.

The specialty menu item created exclusively by the Hoboken-born and raised sisters (Fusun, Gonca, and Arzu Esendemir), features six different flavors of hummus, including a traditional flavor that has been a staple on Flatbread Grill®’s menu since it was founded in 2007. The vegan, Mediterranean family recipe is delicious, healthy, and rich in nutrients, as well as high in fiber. Flatbread Grill®’s Rainbow Hummus consists of plentiful non-GMO, organic ingredients, such as turmeric, ginger, spirulina, and kale. Rainbow Hummus is the first of it’s kind on a restaurant’s menu. It will be available to order online beginning June 12, 2017, which marks the anniversary of the Pulse Nightclub shooting.

In addition to the Rainbow Hummus, Flatbread Grill® will also be inviting members of the LGTBQ community to express their PRIDE by designing artwork inside the store and on the storefront windows. 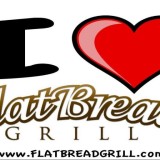